The Port of Orange Transmodal Marine Yard (TMY) Project, funded in part by the U.S. Department of Commerce Economic Development Administration developed new intermodal cargo transportation facilities at the Port’s Alabama Street Terminal which is located in Orange County, Texas at the intersection of the Sabine River and the Intracoastal Waterway.

The project consists of the following major components:

Intermodal containers have traditionally been transferred from their manufacturing facility to ports by trucks or railcars. Barge movement is more efficient and cost effective than rail or trucks, especially when the cargo originates at a plant or warehouse near a port with water access. Container-on-barge service often costs the shipper less than traditional truck or rail service, because it takes advantage of the economies of scale of moving several loaded containers on a barge propelled by a single tugboat. A further advantage is provided by loading a container to its maximum engineered capacity, which would make it too heavy to transport over the nation's highways. Containers transported on barges can be loaded with up to 20% more cargo than a traditional "over-the-road" truck, a fact that translates into a savings in transportation cost to the shipper. Overstuffed ocean going containers effectively eliminate every 5th container since marine transportation is based on cube volume rather than on cargo weight. 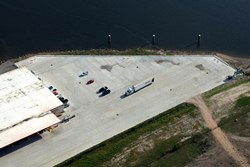